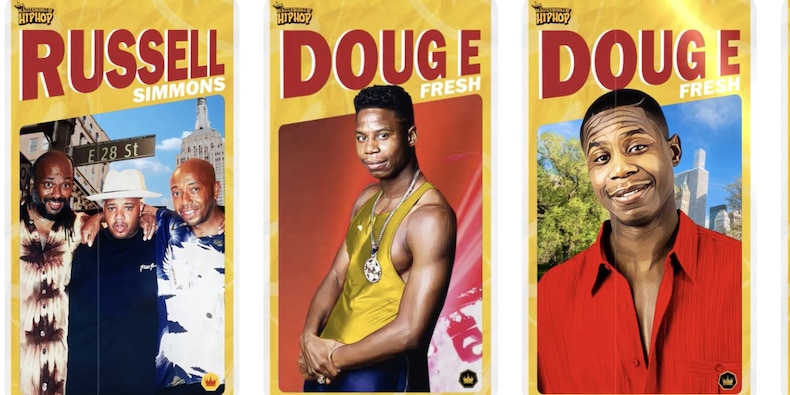 Images of Russell Simmons and rapper Doug E Fresh are in the ‘Masterminds of Hip Hop’ NFT project (Paybby).

Def Jam Recordings founder Russell Simmons is moving into the nearly $800 billion NFT market with a project centered on pioneers in the hip hop music industry and curated with rapper and NFT collector Snoop Dogg.

Official sales for the “Masterminds of Hip Hop” collection will go live on October 10, with presales already running on the website of Paybby, a startup digital bank and fintech company. Simmons also teamed up with Tokau – a sales platform for non-fungible tokens – on the project which is a two-part collection that will have at least 40 NFTs and will include never-before-released recordings.

A “respect for the founding fathers of hip hop needs a reboot,” Simmons was quoted as saying by DeCrypt on a Zoom call Tuesday discussing his motivation behind entering the NFT space. The market has boomed in popularity over the last year, with its valuation climbing to around $768 billion as of Wednesday, according to CoinMarketCap.

The first group of 27 NFTs includes fan cards that resemble baseball cards emblazoned with images of Simmons, Chuck D, rapper Doug E Fresh and other artists and producers who drove the rise of hip hop, a genre that’s morphed into a worldwide phenomenon from its roots in the Bronx in New York City.

Simmons and Snoop Dogg are among the many high-profile names who have jumped into the NFT space, ranging from singer Katy Perry, NBA team Golden State Warriors, and Twitter CEO Jack Dorsey who sold his first-ever tweet as an NFT for $2.9 million. He donated the money to charity. Snoop Dogg’s ventures into the world of NFTs were highlighted by his claim last month that he’s behind an influential NFT account on Twitter called CozmoMedici.

People buying NFTs gain the rights to their unique tokens on a blockchain. People buying from Simmons’ collection can use debit or credit cards to pay for their purchase without buying and exchanging crypto, a tactic that DeCrypt said helped NBA Top Shot digital collectibles pull in mainstream collectors.

Many rappers and DJs who pioneered hip hop never received accolades or financial benefits that should have come from their work, said Simmons.

“[This] is my chance to use a new vehicle to revisit and repay these amazing artists while they are still living,” said Simmons in a statement in June.

More troubles for Binance, the NFT edition of Fortune, and the crypto market tips US$2 trillion